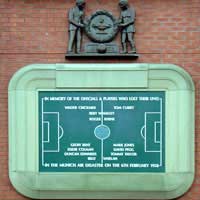 It was a fitting tribute, the one minute of silence before the Manchester derby game on Saturday 10th February 2008. Despite fears voiced by Manchester City's hierarchy that their fans' hatred of United might cause the silence to be disrupted, it passed uninterrupted, showing that the disaster fifty years earlier had indeed touched the whole city, let alone the rest of the country.

Although suggestions had been made to change it to a minute of applause, as has happened recently for tributes to players who have died, the silence was surely more appropriate for such a colossal disaster.

The crash of the BEA charter plane carrying the United team, backroom staff, journalists and other officials, eventually claimed the lives of twenty-three people. Duncan Edwards initially survived the crash but died from his injuries 2 weeks later.

The plane had stopped to re-fuel at Munich on the way back from a European Cup match in Belgrade. United had just drawn 3-3 with Red Star Belgrade in the second leg of the quarter-final to secure a place in the semis, 5-4 on aggregate. They had lost in the semi-final the previous season, to eventual winners Real Madrid, even though it had been their first appearance in the competition, so were strongly fancied to take the title in the 1957-58 tournament.

So it was not only United who were affected, and indeed, it was only by chance that Denns Viollet, who survived the crash and went on to be capped for England, had played for United rather than City.

Of the United players who died, captain Roger Byrne, Duncan Edwards, David Pegg and Tommy Taylor had been capped for England, and a few of the others might have been, had they survived.

Byrne had been capped 33 times and Edwards had eighteen caps although he was only 21 years old. Pegg had only gained one cap so far but was widely tipped to replace Tom Finney, in the same way that Taylor, with 19 caps and 16 goals, was earmarked to replace Nat Lofthouse in the centre-forward spot.

So the face of the national team changed that night too, with the future England side that had been developing swiftly having to find new blood. As survivor Bobby Charlton has often said, if the crash had not happened, it might have been Duncan Edwards, who many believe could have developed into the greatest player the world has ever seen, lifting the 1966 World Cup rather than Bobby Moore.

Some of the other survivors didn't recover as well as Charlton. Players Johnny Berry and Jackie Blanchflower, brother of the Tottenham and Northern Ireland captain Danny, never played again. Kenny Morgans, only eighteen at the time, is still traumatised by his experience and left United after a couple of years.

The airliner's captain, James Thain, was hounded for many years by German airport authorities for causing the crash and although finally cleared ten years afterward, had been dismissed by BEA just after the crash and was never taken on again.

With caretaker manager Jimmy Murphy standing in for the still recovering Matt Busby, United won their first match after the crash with a team full of youth team and reserve players, but their title challenge understandably faltered thereafter. They did manage to go through to the final of the FA Cup but lost to Bolton Wanderers. In the semi-final of the European Cup, United won the home leg 2-1 against AC Milan but were overwhelmed in the return, losing 4-0.