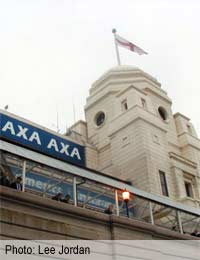 For a long time the old Wembley Stadium, officially the Empire Stadium, was the most famous in the world, with the iconic twin towers well recognised landmarks. As well as hosting the FA Cup Final, a match televised around the globe ever since that became possible, Wembley had eventually become the home of the English national football side.

The Empire Stadium had been built in less than a year as part of the development of Wembley Park Leisure Grounds to host the British Empire Exhibition of 1924. Its first use as a football ground was hosting the 1923 FA Cup final, the legendary 'White Horse' Final, and the first England international football match was held there in 1924, a 1-1 draw with Scotland.

The evolution of Wembley as the home stadium followed a curious path. The next home match against Scotland, in 1926, was held at Old Trafford in Manchester, thanks in part to a poor gate for the 1924 match. In 1928 the FA tried Wembley again and, thanks largely to a travelling crowd from Scotland, it was successful enough for Wembley to be established as the venue for the annual England versus Scotland game until the final one in 1989.

Initially it was only used for those matches against Scotland, either as part of the Home International Championship or, when that was abandoned after 1984, the Rous Cup. For the other matches in the Home Championship, against Wales and Ireland (then just Northern Ireland after the 1921 partition) England continued to use other grounds around the country.

Because the England-Scotland matches were held in such high esteem around the world, being as it was the first international football competition, this gave Wembley hallowed status around the world as the home of international football for a long time. Although England declined to contest the World Cup the first few times it was held, they were still recognised as the best team in the world.

In the 1950s England began to open up to international football, joining the World Cup, inviting other teams to Wembley, and as hosting all their Home Championship home matches there. An invite to Wembley was considered a great honour and Argentina were the first team from outside the British Isles to play there in May 1951, with Austria following later in the year.

Then the Hungarians arrived in 1953 to famously demolish England 6-3, ramming home how much the United Kingdom's self-imposed isolation from global football had cost them. That was the first time a team from outside the British Isles had defeated England on English soil, and it was a comprehensive lesson too.

Fortunately this was put right in the World Cup of 1966 with Wembley hosting all England games including the famous final where the Germans were defeated 4-2, with the controversial third England goal still in dispute. But the Germans had the last laugh when the final match of the old Wembley Stadium, a 2002 World Cup qualifier, ended with a 0-1 defeat and the resignation of then England manager Kevin Keegan.

Despite Wembley's status around the world as the home of international football, the sad truth was that the stadium had not been significantly developed since its construction in 1923. Although its closure in 2000 was fretted over by many people the ground was no longer fit to host major events and a new stadium was sorely needed.

Football and the New Wembley Stadium
Share Your Story, Join the Discussion or Seek Advice..
With the demolition of the old stadium was also demolished England's heart.In its place a place fit for corporate hospitality and a monument to the hateful commercial culture that was so discredited only a few years later, leaving a legacy of debt we can no longer afford.The new stadium stands as a testament to the Winner Takes All mentality of the FA and its Premier League that has so blighted England's mentality and identity.It is a cursed, wretched place. This building should never have been taken down.If there was to be a national stadium, it should have been built in Birmingham, and Wembley left as a National Youth Stadium and London's main mass concert venue. Our best hope is that one day, it will re-emerge as a replica and English street football can rise with it like a phoenix from the ashes of the megamillion bonus lunacy.
Elmbeard - 21-Aug-11 @ 7:28 PM
Title:
(never shown)
Firstname:
(never shown)
Surname:
(never shown)
Email:
(never shown)
Nickname:
(shown)
Comment:
Validate: