Rise Of The England Women's Team 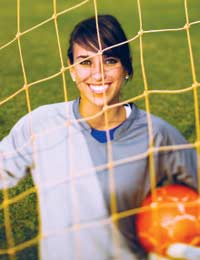 Women's football in the United Kingdom is on the way up although it still has some way to go before it reaches the giddy heights of hype and money surrounding the male game.

Women had played football from the early days, with the first international played between a Preston based team, Dick, Kerr's Ladies and an invited French Ladies team, which the English team won 2-0. The popularity of the game and Dick, Kerr's Ladies in particular led to the FA banning women from playing at the grounds of clubs associated to the FA in 1921!

That ban was lifted in 1971, after England had fielded a team in the first unofficial world tournament in 1970 and had finished fourth. A Women's FA had been formed in 1969, was recognised by the FA in 1973 and the first 'official' international for England saw them beat Scotland 3-2 on November 19th 1972, almost exactly one hundred years after the inaugural men 's international.

Development Outside the FA

The development of the women's game continued but outside the traditional clubs, with very few men 's clubs having women's sides (with the notable exception of Arsenal) until the resurgence of interest in football generally in the 1990s. Despite this England did well in the unofficial World Cups, winning in 1985 and 1988.

Running the separate Women's FA became a struggle for those involved and in 1993 day-to-day management was handed over to the FA. From an international perspective the game then hit the doldrums, with the team only qualifying for the World Cup once, in 1995, in between their win in 1988 and the 2007 tournament. FIFA had taken over the Women's World Cup in 1991 and it is now held every four years, in the year following the men's tournament.

Football Tidies Up it's Image

The sea change in English football that began in the late 1980s, to make the sport more attractive to families and get away from the hooligan image, led to more women becoming interested in both watching and playing the game.

The emergence of footballers as national icons also helped, as increasing numbers of men and women began to go to matches to see their favourites in action. This, coupled with a little more attention in terms of grass roots support from the FA, led to a surge of interest in women's football.

Popularity of the Modern Women's Game

Today most of the teams in the Premier League and Football Leagues have women's sides and they have joined the independent sides that dominated in the past. Many local teams also now have a number of girl's sides alongside the usual boy's teams and report increasing numbers taking up the game. With more than 100,000 registered players football passed netball as the most popular sport for women in 2002, an aim the FA stated they were looking to achieve by 2005.

This has fed through into vibrant women's Premier League and Cup competitions and the national side has begun to see an improvement too. The global picture is dominated by Germany, Brazil and the USA, with Scandinavian teams very strong too, but England have done well in recent European championships and qualified for 2007's World Cup in China, being knocked out in the quarter-finals by the USA.