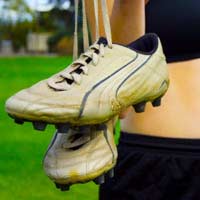 Although the Football Association in England had lifted its ban on women players at FA affiliated clubs or grounds in 1971, and the first full recognised Ladies England international game took place in 1972, it wasn't until the 1990s that the modern women's game began to really catch on. Now there is a full league in the UK and the women's international side compete in regular European and World Championships just as the men's team do.

The Women's FA had been set up independently in 1969 and affiliated to the FA on the same basis as a County FA since 1983, then in the mid-nineties the FA became to get more heavily involved. In July 1993 they appointed a Women's Football Coordinator and a Committee to support the post and the following season's WFA National Cup came under the wings of the FA and was renamed the FA Challenge Cup.

The WFA had inaugurated a national league in 1991 with 24 clubs, and the first FA Challenge Cup attracted 137 entrants, then in the season after that the FA took over the running of the League and League Cup. The FA established a three division league with ten teams in each.

The national side had played their first modern day international in 1972, beating Scotland 3-2 almost exactly a century after the first official men's international with the same participants. Since then they had done well in international tournaments, winning unofficial World Cups in 1985 and 1988, but then hit a slump. When the FA took over the League they also took over the running of the national side, but they have only qualified for the World Cup twice since then, in 1995 and 2007.

England had appointed the first coach to the female national team, Hope Powell, in 1998 and she still holds the post today. This appointment, and the establishment, at around the same time, of twenty Centres of Excellence for girls, came from the development of a coherent talent development plan launched by the FA to put the support in place to grow women's football from the ground up.

In other countries the women's game was getting strong. The USA were the first to setup a full-time professional women's league, although it didn’t last long, after the very commercially successful 1999 World Cup tournament was held there. Strong crowds attended that World Cup with over 90,000 at the final, which the USA won on penalties. Germany and the Scandinavian countries have traditionally been the strongest teams at the European Championships and the only ones to challenge the US on the world stage.

In the first decade of this century the seeds of the FA's development plans began to bear fruit, and England played a strong team in the European Championships of 2005, the first to be held in England. Beating Finland 3-2 in their opener England then went on to lose against Sweden and Denmark, both times by the odd goal, and went out at the group stage.

Not fazed, the squad went into a tough qualifying group for the 2005 World Cup Finals, and came out on top by a whisker, holding France away 1-1 to clinch their spot in the last qualifier. At the finals in China England made it difficult for themselves by conceding a very late goal from a free kick against Japan in their opener, the game ending in a 2-2 draw. But they then took Germany, the reigning World Champions, and eventual winners of the tournament, on in a thrilling match that ended 0-0. Qualification for the quarter-finals was assured with a 6-1 walkover against Argentina, but the USA were too strong in the knockout match, particularly their clinical finishing. Once England's defence was breached, just after the start of the second half, there was only one winner and the match ended 3-0.

Things Looking Up For the Women's England Squad

Despite this defeat the mood remains upbeat and it does seem that the English women's side is getting better and better. With the League going from strength to strength and the 'Bend It Like Beckham' generation on their way, there's more than enough reasons to feel positive about the coming major tournaments.