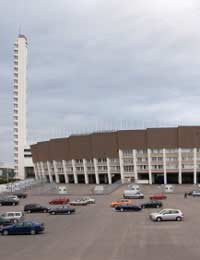 The UEFA Women's Football Championship finished on Thursday 10th September 2009 with disappointment for Hope Powell's England senior team. Going into Euro 09 in Finland with well-placed optimism, England went further than many expected but were eventually rolled over by the German juggernaut in the final, losing 6-2.

The score was perhaps unfair to an England side that had held it's own in an open game, staying within one goal of the Germans and continuing to attack until being worn down in the final half hour. Once that fourth German goal went in, defensive errors began to creep in and Germany scored another two.

Although the final was a disappointing result the tournament must be hailed as a success for England. Coming second in Europe is a major achievement, particularly since they had a tough qualifying group and had to rely on being one of the best third-placed teams to get through to the knockout stage.

In the opener against Italy, England had to play with ten women for over an hour after Casey Stoney was sent off for denying a goalscoring opportunity. Despite this they took the lead before eventually losing 2-1. Things started to look even worse in the next match when Russia went 2-0 up after 23 minutes, but a spirited England comeback saw a complete turnaround before the players went in for half-time. With no more goals in the second half, the result eventually followed form, England winning 3-2.

Knowing that only a win in their final group match, against Sweden, one of the tournament favourites, would see them confirmed qualifiers for the quarter-finals, England scored first. But a penalty by Sweden levelled the scores just before half-time. In the second half England were the stronger side but could not add to the score. This left them in third place in the group but their results were good enough to put them above Norway and Denmark, the other third placed countries, and England were through to face hosts Finland.

England again started well, going 2-0 up before Finland pulled one back. But immediately from the restart Eniola Aluko received the ball near the centre circle then ran straight past three tackles to smash the ball home. But Finland weren't finished, scoring again to set up a tense finish with Rachel Brown, England's goalkeeper, making two fine saves near the end.

That set England up for a semi-final against Holland although they were without talismanic skipper Faye White. She had gone off with a cracked and dislocated cheekbone just before half-time in the match against Finland. Both teams scored inside a mad five minutes halfway through the second half. With no more goals in the second half it was extra time for the first time for England and a header from a corner four minutes from the end sealed the match.

With Faye White back for the final, sporting a Gazza-style face mask, England were ready for the Germans. They were buoyed by the dogged defensive display that had sealed a 0-0 draw in the 2007 World Cup, the last time the teams had played each other competitively. England went out hard and strong, missing a couple of good chances before Germany went ahead with almost their first attack of the game. They then doubled the lead two minutes later with a glorious strike by Behringer for fully 40 yards out.

England didn't lose heart and scored themselves a couple of minutes later but Germany restored their two-goal advantage just after the break. Again England pulled one back. This was a glorious turn, completely throwing the defender, and a clinical shot across the keeper by Karen Smith, all after a superb disguised pass from Karen Carney. It wasn't enough though, and the Germans superior strength and big match experience showed in the end.

Euro 09 was the seventh UEFA Women's Championship win for Germany and the fifth in a row. Having already successfully defended their World Cup win in China in 2007 this has simply reconfirmed Germany's status as the most powerful women's team in the world.
Next Page