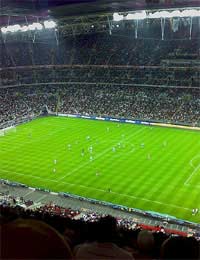 Once the decision had been taken to demolish the Empire Stadium at Wembley and build a new one in its place the stage was set for a saga that was to last for nearly seven years. At the end of it all a statue of Bobby Moore, England's greatest captain, stood in front of an undeniably majestic National Stadium.

Need for a National Stadium

There was no denying that a new home for English international football, as well as all the other events that Wembley hosted, was sorely needed, as the main fabric and layout of the stadium was unchanged since its first football match in 1923. The only major change had been the enforced conversion to an all-seater stadium.

This came from the Taylor Report, commissioned after the disastrous events at Hillsborough and Bradford, which led to a ruling banning terraces, and it had severely reduced the seating capacity of the old ground.

Designed principally by Norman Foster, the new stadium can be seen for miles around, identified principally by the soaring steel arch so high and wide that the London Eye could easily be rolled through. Inside there is seating for 90,000 with no columns to impair the view.

The roof slides back and forth depending on the weather but does not fully close, as it has proved difficult to keep natural grass pitches in top condition in stadiums designed this way. In fact the roof, when fully retracted, allows sun to reach all areas of the pitch even on a winter's day. A great deal of work was performed on acoustic analysis to keep the defining Wembley roar but at the same time contain the sound within the stadium to reduce disruption to surrounding residents.

The construction of the stadium is likely to be held up in years to come as a text-book example of how not to manage a major sports facility construction project. The last England international match had been held in October 2000, a disappointing rain-soaked defeat by Germany in the opening 2002 World Cup qualifier.

The stadium was subsequently closed, but wrangling between the FA and the government, and then the Australian firm contracted to do the job, meant that demolition didn’t start until 2002. Bearing in mind the intention was to open the stadium in 2003, it was no surprise when delays were announced. In the end the stadium opened four years late with costs nearing three times the original estimates.

The first England international to be played at the new ground was a friendly against Brazil and a late equaliser robbed England of a fairy tale opening match at their new home. In a creditable performance that included David Beckham's return to international football, after resigning the captaincy after the 2006 World Cup, they had been leading since John Terry headed home a free-kick in the 68th minute.

Another friendly followed and another decent performance unfortunately failed to deliver a win as Germany returned to Wembley seven years after they spoilt the end of the old era to do the same for the start of the new. They beat England 1-2 even though England opened the scoring through Frank Lampard in the 9th minute.

Looking to a Bright Wembley Future

Fortunately once the remaining home 2008 European Championship qualifying matches started at the new stadium the wins began to come with Russia, Estonia and Israel all being beaten. That set England up for a crunch decider with Croatia, England needing at least a draw, with Croatia already qualified. But as so often happens, England failed, losing 2-3.

Now sporting a new manager to match the new stadium it is hoped that the national side's luck will turn and performances will begin to match the grandeur of the new home of England's international team.