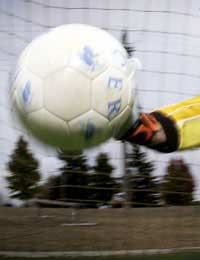 Most of these are taken from the last twenty years so younger team members are more likely to be able to get them.

Answer: Theo Walcott was 17 years and 75 days old when he appeared against Hungary at Old Trafford on May 30th 2006

Answer: Peter Crouch, in a friendly against Jamaica at Old Trafford on 3rd June 2006

Answer: David Beckham, a straight red against Argentina in the 1998 World cup and two yellows against Austria in a 2006 qualifier.

These questions go back in time and are a little more obscure, good for fanatics.

Answer: Bobby Moore, awarded his 108th cap against Italy, 14th November 1973 (Peter Shilton has 125 but is not an outfield player).

Answer: Austria (twice) and Hungary; they won all three matches.

Answer: 1950, in Brazil; England failed to qualify from the group stage.

Answer: Gary Lineker with eleven. Seven goals in Mexico in 1986 (winning the Golden Boot) and four at Italia '90