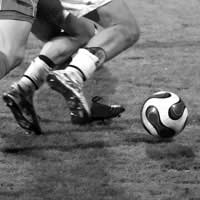 Friendly matches: a valuable opportunity for managers to try out new players and systems or a waste of time that cause disruption and that clubs can ill afford? England Caps looks back in time at the history of friendlies, and it doesn't necessarily mean a friendly atmosphere, simply a match that is not part of a competitive tournament.

Once upon a time, back in the 1870’s to be exact; there were only two international teams, so England and Scotland simply played each other once a year, alternating home and away. Although not designated as such at the time, these were effectively friendlies as there was no other form of match possible. Then Wales (1879) and Ireland (1882) joined in.

The first inter-nation competition in the world came from the logical step of creating a round-robin tournament combining the four existing national sides, to form the British Championship, more commonly known as the Home Championship. So friendlies ceased to exist again, until 1908, when England played their first internationals against sides outside that Home Championship, on a summer tour of Austria, Hungary and Bohemia.

This successful experiment was repeated the following year, but then didn’t happen again until after World War I. As more European national teams were formed, the scope for friendlies increased, and the England tour at the end of the League season became an annual event until stopped by the outbreak of World War II.

Football had appeared at the Olympic Games off and on, but from an English point of view they were irrelevant as their best team could not compete, being professionals. The World Cup, first held in 1930, was designed to deliver a championship for national teams of professional players, but disagreements with FIFA over payments to amateurs kept the home nations out of FIFA, and hence out of the World Cup.

This marks the period when friendlies really came into their own. Isolated with their own ‘World Cup’ in the form of the Home Championship, England could claim to be the true world champions simply by inviting the World Cup winners to Wembley and beating them in a friendly.

That exact situation caused probably the least friendly ever. It occurred a few months after the 1934 World Cup, when the FA invited the newly crowned World Cup winners, Italy, to London, for a match that would be known as the ‘Battle of Highbury’. In the opening minutes an Italian player was stretchered off after a collision with England and arsenal centre-forward Ted Drake. Drake swore afterward that there was no malice in the challenge but at the time the ten remaining Italians tore into the English, resulting in two black eyes for Drake, a broken arm for Eric Brooke and a broken nose for captain Eddie Hapgood. England eventually won 3-2 but it was a close call.

The Home Championship was still the most important competition for England, so without competing in the World Cup, friendlies became the only way they could test themselves against other opposition. Full first-team squads were deployed for friendlies and they were as competitive as any Home Championship match. Equally, other teams wanted to play England, as they were still very highly regarded on the international scene.

Then in 1953 came the blow that many in English football had to be expecting, the first home defeat by a side from outside the British Isles. The 3-6 defeat by the Hungarians, fronting by the legendary Ferenc Puskas, did untold damage to the English psyche and demonstrated that they were behind in so many ways, not just skill and tactics, but approach, attitude and even kit! This was a truly meaningful friendly.

By that time the sides from the United Kingdom had rejoined with FIFA. England competed in the World Cup of 1950, and as the 1966 World Cup approached, Sir Alf Ramsey began to use friendlies as they are used today. The most notable occasion was the 2-0 defeat of Spain in 1965 as Ramsey tested his ‘wingless wonders’ format for the first time to incredible effectiveness.

The European Cup, which England competed in for the first time in 1964, was a much smaller affair, being played in a knockout format with home and away legs, and just the top four sides coming together for a tournament. This left more time for friendlies and for the Home Championship, and so friendlies kept their value as opportunities to try out new ideas and young players.

End of an Era

But the Home Championship was finally disbanded after the 1983-84 season, partly because of fixture congestion, but also because of crowd violence, occasionally mixed with politics, with the 1980-81 competition abandoned after both England and Wales refused to play in Northern Ireland. The European Championship in particular has expanded massively in the last two decades, largely because of the break-up of former Eastern Bloc countries creating many more entrants.

These days, as soon as the European Championship is over, qualification for the next World Cup begins, and so on, so the calendar is much more crowded with competitive fixtures. A similar thing has happened with club football, in that the UEFA Champions League now means for more games each season for the top clubs, who naturally supply many of the England players.

This has led to the now familiar battles between England management and club management to get access to players, and the increasing likelihood of players being withdrawn from friendlies to protect them for club duty. This devalues the friendly games for spectators and players, as does the use of multiple substitutes in a game, something that Sven-Goran Eriksson sometimes took to ridiculous extremes.

So it’s little wonder that the phrase ‘it’s only a friendly’ has entered the vocabulary of football management. There must be a value, still, of using friendlies as a test bed, but if this continues to be taken to extremes, then they will continue to lose the respect of the fans, players and opposing teams.