Home > Football Stories > The Beginning of The World Cup 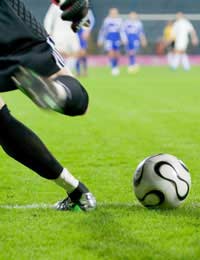 The first World Cup tournament was played in Uruguay in 1930 but the seeds had been sown over twenty-five years before then. Football had really grown incredibly quickly, considering that communications weren’t as fast as they are today. Only thirty-odd years passed between the first international, between England and Scotland, and the creation of a worldwide organising body, FIFA, in 1904.

The name most associated with the World Cup is that of the man whose name was on the first cup, Frenchman Jules Rimet, the Honorary President of FIFA from 1921 to 1954. However, FIFA Secretary Henri Delaunay was actually more the organiser of the competition.

Football at the Olympic Games

The World Cup had been in FIFA’s minds from the beginning though. At its birth the committee had reserved the right to form a global competition, and had first tried to organise a competition in 1906. At that time football had begun to be played at the Olympic Games, but FIFA recognised that many countries could not compete if they had a thriving professional games in their country. Also, the Olympic Games organisers were a little suspicious of the new sport and did not back it as a serious competition, more an entertainment.

An amateur team representing Great Britain had in fact won the Olympic Games football competitions in 1908 and 1912. This was because a large number of amateur teams still competed in the leagues, although this eventually petered out as professionalism took over.

The relationship between the British FA’s and FIFA had been thorny at the beginning but had thawed with the appointment of an English president, Daniel Woolfall, who managed to develop a level of consistency in terms of rules and regulations between the two groups, but the interruption of World War I put further developments on hold.

After the end of the war, FIFA took over the administration of the Olympic Games football tournaments but the amateur status of the games continue to cause problems. The British FA’s had once more left FIFA in 1920, in arguments over paying amateurs to compensate them for the money they lost by pursuing their sport. There is also some evidence that there was a reluctance to join an organisation with nations that had until very recently been their deadly enemies.

The first Olympic Games football tournament run by FIFA was a resounding success. It was also a complete shock for European fans, as no-one was ready for the superior football that had developed in South America. Uruguay in particular were astonishing, thrashing European teams all the way to the gold medal by great margins. The final was watched by over 60,000 people, with 10,000 more outside, unable to gain entrance.

The dominance of South American teams was repeated in Amsterdam in 1928 with Uruguay beating Argentina in the final after a replay. Having declared the Olympic Games the world championship for football for amateurs, the success and popularity of these tournaments galvanised FIFA into organising their own for professionals.

In that same year FIFA took their decision to organise a competition and chose Uruguay as the hosts. This was for two reasons, firstly they had proved that they were one of the best teams in the world, and secondly it would coincide with their celebration of 100 years as an independent state.

The tournament was a great success, and of course, Uruguay won, but with the teams from the British Isles excluded and a recession in Europe, only four teams went from Europe. This caused the Uruguayans to refuse the invitation to defend their title in Italy four years later, and in fact they then refused to attend the 1938 competition in France. Argentina withdrew as well, as they felt the tournament should have been held in South America rather than in Europe again, but they were trumped by Austria’s reason for withdrawing, because they had been annexed by Germany.

Soon World War II intervened, but afterward, the various football associations in the UK re-joined FIFA and consented to compete in the World Cup. The Home Championship was used as a qualifying round, and England went through for the 1950 competition to be held in Brazil.

England’s failure and the reasons for it are covered in detail elsewhere but the modern World Cup was now firmly in existence and would continue to grow in popularity. The Jules Rimet trophy that England won in 1966 was won outright by Brazil in 1970 when they became the first country to win the competition for the third time, although it was later stolen and never recovered.

The growth of revenue from World Cup competitions, FIFA’s only real source of funds for many years, exploded with the spread of television and each contest has grown in every way, popularity, TV revenue, spread of contestants and complexity.If Jules Rimet and Henri Delaunay were alive today they would not recognise the festival they created, but they would still recognise the game being played.