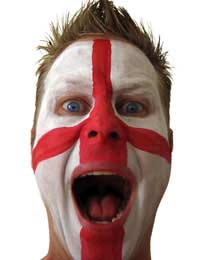 The lead up to the 1986 World Cup quarter-final match between England and Argentina was one that any England fan would recognise. Not really considered a side capable of winning the trophy England had struggled through the qualifying groups against some indifferent teams, then suddenly started to click, in particular the partnership between the archetypal poacher Gary Lineker and Peter Beardsley, and the defence splitting passes of Glen Hoddle.

The Argentine team found themselves in a similar position, as the general opinion at home was that it would not be possible to win the tournament in Mexico with only one player, the superbly skilful Diego Maradona. The game had added spice as it was the first time the teams had met since the ill-fated Argentine invasion of the Falkland Islands and their humiliation in the subsequent war.

After exchanging chances during the first twenty minutes, Argentina began to control the game with a combination of Maradona’s close-controlled dribbling and short, sharp passing movements around him. By half-time England’s goalkeeper, Peter Shilton, had already made a number of saves from free kicks given away in dangerous positions as the defence tried to contain Maradona.

It all happened in the second half though. On 51 minutes Maradona chased a miss-hit high looping ball toward Shilton. Being by far the taller of the two men, Shilton was the clear favourite to catch the ball (keepers were allowed to pick up back passes in those days) although on this occasion he elected to punch it clear. To everyone’s amazement, Maradona reached the ball first, and it went over Shilton into the net for the opening goal. As the English players surrounded the referee, complaining in vain for several minutes, slow-motion replays clearly showed that Maradona had also elected to punch the ball.

The goal galvanised the Argentineans and five minutes later Maradona waltzed at high speed, past five English players and rounded Shilton to score the goal of the tournament, a goal that was subsequently voted the goal of the century by a FIFA poll at the 2002 World Cup. Watching this run, and the close control that Maradona exhibits, it is almost impossible to believe that Maradona is an almost completely one-footed player (the left). Another astonishing fact is that, to English fans’ amazement, Terry Butcher did not simply scythe Maradona down as he sailed past.

After this setback England began to clamber their way back into the game; a close free kick from Hoddle galvanised England. John Barnes came on as a substitute and began to worry the left-side of the Argentine defence, and in the seventy-eighth minute, Lineker scored from a Barnes cross to make it 2-1. At the death, England very nearly scored with a duplicate move, but equally, Argentina came just as close with a move controlled by Maradona leading to Tapia’s low drive hitting the post.

After the game Maradona would not admit that he had handled the ball for his first goal, despite irrefutable photographic and video evidence. He was quoted as saying that it was scored ‘a little with the head of Maradona and a little with the hand of God’, and so the phrase ‘the Hand of God’ entered the world of English tabloid newspapers, and has been with us ever since.

Although after the match there was little criticism of the Tunisian referee, Ali Bennaceur, this World Cup match, which was his first, proved also to be his last. The incident is credited by FIFA as leading, albeit indirectly, to the instigation of the Fair Play Campaign which, among other initiatives, makes a Fair Play award at most major tournaments. This has at least given England a fair crack at a trophy now and then.

Maradona was probably the only player who many people agree had potential to outshine Pele as the game’s greatest ever player, and it is a great shame that the Hand of God goal, for English supporters at least, overshadows the Goal of the Century, and will forever taint the memory of a fine player.

Argentina went on to win the competition in a thrilling 3-2 win against West Germany, while Maradona was pipped at the post as the top scorer of the tournament by one Gary Lineker of England.

Footnote: The goal that was voted the second best goal of the century, in the 2002 vote, was by Michael Owen, for England against Argentina, in the 1998 World Cup. Argentina won that one too.