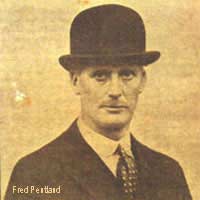 In the Twenties there were only a few friendly international matches played by England, usually on a summer tour at the end of the season. It was on one such summer tour that the inevitable happened, as far as football on the continent was concerned, England were beaten by a team from outside their usual stronghold, the British Isles.

Spain were a young country in footballing terms, their leagues were regional and their international debut was at the 1920 Olympic Games where they did well to win silver, albeit via Czechoslovakia’s disqualification. The first home Spanish home international followed a year later when they beat Belgium 2-1 in Bilbao, and in 1928 a national league was formed from the cream of the regional leagues.

Coaching as such wasn’t really recognised in England and one of the many English and Scottish players who went to coach on the continent after their playing careers were over was Fred Pentland, and ex-England international. He ended up in Spain coaching at carious clubs and also helping out with the national side under manager Jose Mateos.

In common with other English coaches abroad, such as Jimmy Hogan who created the legendary Austrian national team of the Twenties and Thirties, Pentland favoured the short passing game that made them unpopular in their native land (no change there then!). While England were still following a 2-3-5 ‘pyramid’ formation, Pentland drew two of the forwards back to shorten the distances involved in passing from the front to the back.

Although the summer tours were gruelling in terms of travel and the number of matches, they were not taken all that seriously in footballing terms. Although Arthur Blenkinsop was in defence, regular captain Willis Edwards was among the missing names from the side that left England. The squad also featured Edgar Kail, of Dulwich Hamlet FC, who was the last player from a non-league club to be capped for England, but his three caps on the tour proved to be the only ones.

England played France on the ninth, Belgium on the eleventh, and Spain on the fifteenth of May, 1929. So by the time England got to the Estadio Metropolitano in Madrid to play Spain, they were probably exhausted, not only by the short timescales for travelling between the games, but also the drinking and general enjoyment that had become de rigeur for these annual tours.

There was no real coaching of the England side, the prevailing methodology being, at both club and country level, that senior players dictated what should happen on the pitch. With teams being selected by the FA’s International Selection Committee, the teamsheets in the Twenties were full of players with few caps. The honour of playing for England was parcelled out to deserving players rather than there being any sense of team development.

Still, shortly after the match began, England must have assumed that the natural order would prevail. Leading scorer Dixie Dean was on the tour but not playing in the game, but Joe Carter stepped up with two goals in the first twenty minutes.But Spain were not going to take this opportunity lightly and fought back to level the scores by the interval, goals coming from Gaspar Rubio and Jaime Lazcano in a purple patch ten minutes before the break.

Second Half Fight Back

The Spanish team’s short passing game was leading to domination but until then, no real effect. After the break, England came out with more determination and took the game by the scruff of its neck and centre-half Jack Hill scored after five minutes.

Slowly, as had been the case in the first half, the Spanish began to build again, and Rubio equalised once more with just ten minutes to go. Urged forward again and again, a tired English defence finally succumbed three minutes later to a goal from one off the deep lying forwards, Severino Goiburu, and Spain had won.

There isn’t really any evidence that this game was treated as a watershed in the press back home, although it was the last time that England would lose a game after being two goals up until the soul-destroying 1970 World Cup quarter-final defeat by West Germany, over 40 years later. With the team lacking a few key players and being at the end of a tiring tour, it was glossed over.

Two years later, England returned the favour, inviting Spain to play in London, at Highbury, Arsenal’s ground, on a cold December day. With Dixie Dean restored to the side, Spain were annihilated in a pitiless revenge action. The 7-1 defeat is still on record as Spain’s heaviest loss.
Next Page