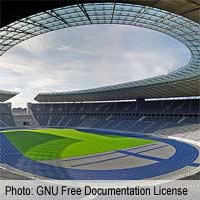 The Olympiastadion in München, or Munich, was built for the 1972 Olympics and at the time represented a revolution in stadium architecture. It is the centrepiece of the Olympiapark which holds two sports halls, an ice rink, a tennis centre and numerous other sports facilities and was the main Olympic venue.

The peaks and troughs of the stadium's panoramic glass roof, supported by steel posts and cables, are dramatic to say the least. This method had never before been used on such a large roof and the look, intended to echo the alpine views that can be seen from Munich, made sure that the Olympics would have a centrepiece worthy of the event.

As is common with modern Olympics there was focus on finding a use for the facilities after the event and to this end the famous German football club Bayern Munich moved into the stadium. In 1990 they were joined by TSV 1860 München and the two continued to share the ground until 2005 when they both moved into a new purpose-built stadium that had been constructed for the 2006 World Cup tournament.

But this site is about England international football, not German amphitheatres. England only played two games in this dramatic location. The first was a friendly in 1978, played as part of Germany's preparations for their trip to the Argentine World Cup as defending champions. England were not going to Argentina. Despite having won all their qualifying matches bar one, the loss to Italy, they had not scored enough goals against Luxembourg and Finland to take them through.

The match was a good one though, with England taking the lead through Stuart Pearson and forcing Germany to come out for their win. After equalising they scored a disputed winner four minutes from time with a free kick taken while England were still forming their wall. It is generally held that England deserved the draw. Bizarrely Kevin Keegan, at the time playing for Hamburg in the German Bundesliga, was in at the time serving a ban which prevented him from appearing for his club, but not his country.

The other match played in the Olympiastadion was of course the revenge for Germany spoiling the closing party at the old Wembley stadium. Again it was a quickly taken free kick, this time by Liverpool's Dietmar Hamann, that led to Germany winning 1-0 on a drizzly October night in the opening qualifier for the 2002 World Cup campaign. Keegan again played a part, this time as England manager, although he resigned immediately after the game.

For the return match at the Olympiastadion almost a year later, Germany was expecting a win but a buoyant young English side had been given new confidence by manager Sven-Goran Ericksson. The match is covered in full in our 'Famous Matches' section but it suffices to say that Germany did not get what they expected.

The writing may have looked to be on the wall when Carsten Jancker, who had been criticised in the English press before the game, took the lead with a well made and well taken goal. But England seemed to respond to the setback and were ahead before half-time through Michael Owen and Steven Gerrard. They finished the Germans off in the second half, Owen scoring a hat-tick and Emile Heskey providing the last goal, the final score-line 1-5.

Now that the new stadium has been built it is unlikely that England will play at the Olympiastadion again, but the memories of their last visit are very sweet.