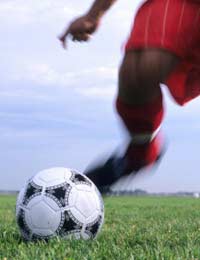 Although Viv Anderson will be forever remembered as the first black player to represent England in a full football international, it was his skill and pace that got him there. If it hadn't been for the strength in depth at right-back then Anderson would have gained far more than his 30 caps. Competition initially from Liverpool's Phil Neal, and later on Everton's Gary Stevens, kept Anderson from playing more fixtures.

One of a new breed of attacking full-backs becoming popular in the late 1970s, Viv Anderson was skilful and solid in the tackle but also able to take men on at pace, overlap on the wing and play the attacking midfielders in.

On his debut it was exactly this skill that made the opening for Tony Currie to cross into the goalmouth where Steve Coppell was waiting to slot the ball home. The game was a friendly against Czechoslovakia at Wembley in November 1978 and that sole goal settled the fixture.

At the time Viv Anderson was playing for Nottingham Forest in their dominant period under the mercurial Brian Clough. They had only been promoted to the First Division (the top football league at the time) in 1977 and the following season took the League title and the League Cup. They followed that up by winning the European Cup, the top football prize available, in 1979, yet Anderson wouldn’t get his second cap until after that, eight months after his debut.

Anderson was in and out of the side from then on as manager Ron Greenwood struggled with his selection choice into the European Championships of 1980. Viv Anderson was selected for the squad but only played in the final group match. Although England won, the results in their earlier fixtures had not been good enough and they went home.

The 1982 World Cup in Spain was to prove worse for Viv Anderson. Phil Neal was still the number one choice, being a very consistent player, and although selected, Anderson didn’t play in any of the fixtures at all. After that tournament Bobby Robson took over from Ron Greenwood as England manager and continued to favour Neal while experimenting with other new boys in the friendlies. As a result Anderson didn't play a single England fixture in 1983.

At the same time the team that Clough had built was breaking up and Forest were on the slide, so Anderson engineered a move to Arsenal in 1984. This had the desired effect, making him more prominent. With Phil Neal's departure after defeat against Denmark at Wembley had scuppered England's chances of going to the European Championships, many in the football world expected Viv Anderson to become the regular England right-back.

But this was just the time that the young Gary Stevens suddenly burst onto the scene. In the run up to the World Cup in Mexico in 1986 it was apparent that Robson, who was sharing right-back duties between the two, slightly favoured Stevens. And so it was that history repeated itself. Anderson went to the World Cup but went home without once kicking a football in anger.

Anderson still impressed enough to win another nine caps after that, swapping runs in the side with Stevens. But the same thing happened again repeated at the European Championships of 1988, when he was selected but did not play in any of the fixtures.

Viv Anderson was undoubtedly an outstanding right-back, it was simply his misfortune to be around at a time when there was an embarrassment of riches at that position. Had it not been for the competition he would undoubtedly have played more than 30 fixtures caps but as role model for the black England internationals who followed him he will never be forgotten.
Next Page