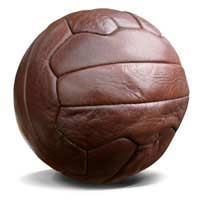 Although an accomplished player Charles Alcock only gained one cap, albeit as captain, against Scotland in 1875. This is a little unfair as a statistic as international football was such a new phenomenon, that England against Scotland was the only possible match! However, he earns his place on englandcaps.co.uk not because of the number of caps but because he was instrumental in the development of the international football, the FA Cup, and indeed, the Football Association itself.

The FA was formed in 1863 in London, although at the time, Scottish teams rather than English ones were driving the standardisation of rules across the land. Charles Alcock was an early committee member, joining in 1866, and was elected at the age of 28 to the position of FA secretary. In 1871 he put his first stamp on footballing history by proposing the FA Challenge Cup, the first 'knock-out' type tournament. Fifteen teams entered the inaugural competition and Wanderers (a now defunct London team, not the Wolverhampton one) won it, captained by Alcock who played at centre-forward.

Alcock's second major initiative was to get the first international fixture off the ground. He did this by writing an address through the Glasgow Herald, inviting representatives to a game at the Kennington Oval, which was then, as now, the home of Surrey Cricket Club. Because the game's basis was completely amateur at the time, financial considerations meant that the Scottish team ended up being composed entirely of Scots living in England, and England won 1-0. There were three further matches, all in England, before the first match to be held in Scotland.

However all those early matches were considered unofficial, largely because the English FA were running everything, even the selection of the Scottish side. Both the English and Scottish Football Associations record the first Scottish-based match, at the West of Scotland Cricket Club at Partick on 30th November 1872, as the first ever official international match. Charles Alcock was down to captain the side, but was injured and had to be content with umpiring, the captaincy being handed to Cuthbert Ottaway, and the match ended at 0-0.

There were a further two games between the two sides, the first won by England and the second by Scotland, before the 1875 match where Alcock captained England. The fixture was at the Kennington Oval, and it ended 2-2, with Alcock scoring England's second goal in the 65 minute. England had had to play without their goalkeeper initially as William Carr was 15 minutes late because of delays on the trains on his route from Sheffield.

Charles Alcock was also instrumental in changing the way that teams were selected for the English side. Alcock was in charge of the selection procedure which at the outset consisted of trials before each match, but with over 90 people arriving on some occasions, the situation was an administrative nightmare. In 1887 Alcock instigated a the International Selection Committee which selected England sides until Walter Winterbottom and then Alf Ramsey took over the duty.

Charles Alcock was also instrumental in the development of modern-day cricket, arranging the first cricket international, again at the Kennington Oval, where he was the Secretary of Surrey CC, against Australia in 1880. At the same time he edited the Cricket newspaper for over 20 years and complied the first 'Football Annual' in 1868. He continued his work with the FA as Secretary until 1896 when he took on the post of Vice President. He held this position until his death in 1907.