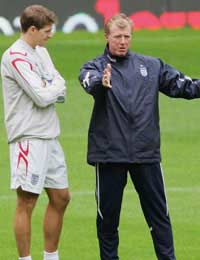 Steve McClaren eventually succumbed to the pressure that other England managers have felt before him. Everyone waited for him to shake off the shackles of the Sven era and build his own team, but that never really happened and he was sacked the day after the 2-3 defeat by Croatia at Wembley that killed of England's hopes of qualifying for the Euro 2008 tournament.

McClaren was a journeyman midfielder in the lower leagues with teams such as Hull City, Derby County and Bristol City. It was at Oxford United that injury halted his playing career and he moved on to the backroom staff, first as reserve team coach and then first team coach. After a spell under Jim Smith at Derby County, Alex Ferguson took him to Manchester United as assistant manager. In 2001 he took on his first managerial appointment, at Middlesbrough.

There he developed the team that took Boro's first ever major trophy, the League Cup, in 2004, qualifying for European competition the following season, again for the first time. McClaren took them to Europe in the season afterward, and then again for the third consecutive time in their most successful outing. They got to the UEFA Cup final of 2006, knocking Arsenal out on the way, but eventually losing to Sevilla.

By this time McClaren had been working with the England camp for some time as the senior first team coach, assisting caretaker Peter Taylor and then Sven-Goran Eriksson after his appointment in 2001. When Eriksson agreed with the FA to quit after the 2006 World Cup tournament, McClaren was among the runners in the race to succeed him, although many were concerned that he would be too much like Eriksson.

After an often farcical selection process that further underlined the managerial ineptitude of the FA, McClaren was appointed even though it had been made clear to him earlier in the process that he had never been first choice. With this ringing endorsement in his ears, McClaren set out his stall by dropping David Beckham, who had resigned the England captaincy after the disappointing World Cup showing.

On the way to taking Middlesbrough to that 2006 UEFA Cup final, almost his last act as their manager, Boro twice won matches after effectively being 0-3 down (they were two leg matches). These achievements gave hope that here was a man who would be able to make effective tactical changes when in charge of an England team that has significant talent.

Early signs were good, with newly appointed captain John Terry scoring in a comfortable friendly win against Greece, but in the qualification stages for Euro 2008 the wins were not coming as easily as they should have been. For the draws against Macedonia and Israel and the defeat by Croatia, the England fans had roundly barracked McClaren. This continued when the mighty England could only beat minnows Andorra by three goals and the situation was not helped by McClaren's treatment of the press. At the press conference after the match he walked out after a couple of questions, saying that they (the press) could "write whatever you want to write."

In a desperate attempt to collar the wins required to qualify for the 2008 European Championship, McClaren recalled David Beckham to the squad. This move gave the press more ammunition against McClaren, although to be fair he is on record as saying, when he dropped Beckham that the door was always open if he could prove, by his playing, that he was worth it.

Fortunately the gamble paid off, as Beckham took the free kick that delivered John Terry's goal against Brazil in a friendly to open the new Wembley Stadium, and then had a hand in two of the three goals in a much-improved display at the qualifier in Estonia a few days later.

The final goal in that game was a well-taken poacher's goal by Michael Owen, his first for three years after a series of serious injuries, and McClaren must have taken heart from Owen's return, but it wasn't to last. England went into the final couple of games without Emile Heskey, who had been brought back to partner Owen in the 3-0 wins against Israel and Russia, Wayne Rooney, captain John Terry as well as Owen through injury and Rio Ferdinand though suspension.

A loss in Russia set England up for failure but an almost unbelievable win by Israel over Russia a month days later put qualification back in England's hands. A draw or a win against Croatia in their final match would see them through, but it was not to be, and McClaren took the fall for that failure.